June 18, 2018: We got together to remember BeBe and place BeBe’s memorial stone next to his mama’s, and sprinkled his ashes at the CV Roadrunner Café feeding spot.

May 16, 2018: Our sweet BeBe has crossed over the Rainbow Bridge today. He was born on campus in 2008. About a year and a half ago he became ill and the veterinarians were really never able to determine what was wrong with him but it was clear that he could not go back to his home at CV with his beloved mother, Gray Mama. One of our members graciously became his permanent foster and has given him a wonderful life since then. It’s a miracle he lasted as long as he did and did as well as he did for so long, but this morning his human mom knew it was time. He ate a little, had a nice bit of time in the sun on his Catio where he loved to spend time, and had lots of love and petting before he went. We will miss him so much but are happy he will be reunited with his mom and will not be in any pain. Thanks so much to his human mom for caring for him and extending his life this long. We are having him cremated and will spread his ashes at CV with Gray Mama.
———————————————————————————–
Update: BeBe was adopted by one of our members in the summer of 2016.
———————————————————————————–
BeBe is a handsome guy with a great personality! Arthur at the PE/Convo site and BeBe are litter-mates, born to Gray Mama in the spring of 2008. 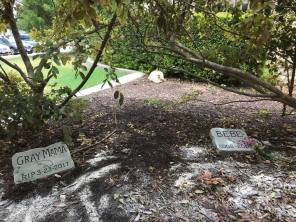 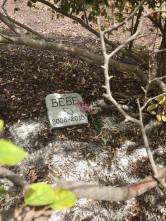 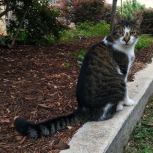 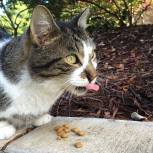 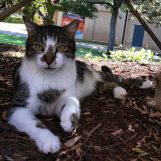